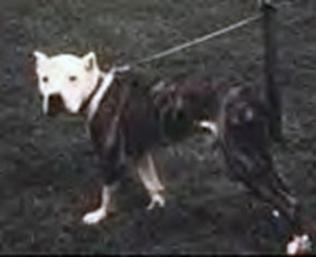 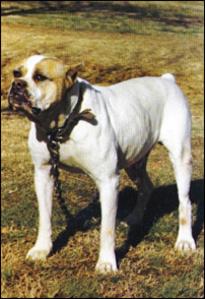 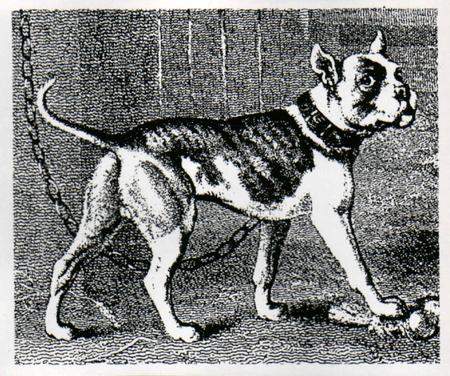 A BRIEF HISTORY OF THE AMERICAN BULLDOG

The ancestor to all the bull breeds including the American Bulldog

The bulldog in his pure form was in America as early as the 17th century. In colonial America bulldogs were used by butchers and even engaged in baiting contests with bulls, bears and buffaloes. The modern American Bulldog can trace it's roots to remnants of the original Bulldog that managed to survive as farmers' catch-dogs in isolated pockets of the Southeastern United States. Its original purpose on these Southern plantations and ranches was personal and property protection and as an aid in handling (catching) large animals such as cattle and hogs.

All modern American Bulldogs can trace their roots to four strains (Williamson, Scott, Bailey & Johnson.) from the Alabama/Georgia area.

The breed was not known by its modern name until the 1980's. The breed we know as the American Bulldog was originally known by many different names before the name American Bulldog became the standard. In different parts of the South he was known as the "English White" or "White English" because he was a primarily white dog. He was also called the "Alabama" or "Southern Bulldog" but most commonly just "bulldog." The breed was not called a bulldog because of a certain look, but because they did real bulldog work. They could and did catch and hold for their owners rough cattle including bad Brahma bulls, and did double duty as a farm protector against feral dogs and two-legged bad guys.

The American Bulldog became noticed by the public in the late 1980's and began to increase in popularity. A good all-around family pet and guard dog was a thing to be desired.

These qualities should be prerequisites for candidates of all modern breeding programs. A well bred dog should be a stable Bulldog that reacts to perceived threats, not a "chain-brain" type of dog. The gameness and determination of a well-bred American Bulldog will come into play if his family is ever threatened.

The American Bulldog is all the dog anyone could ever want, and too much dog for some. He does require early socialization and some basic obedience training. Good examples of American Bulldogs are equally at home catching wild boar and guarding the farm & livestock in a rural setting as they are in protecting family and property in today's crime infested suburban areas and inner cities.

Even though not one out of a hundred of today's American Bulldogs get the opportunity to perform traditional catch-work with cattle or wild boar, the traits this breed inherited from it's gladiator ancestors of bravery, gameness, assertiveness, intelligence, mental stability, pain tolerance, and natural protectiveness, can relate to adverse situations and conditions that can and do happen in today's crime infested cities, suburbs and even rural areas. One of those traits that separate the American Bulldog from other so called protection breeds is its ability to act cool and calm in the heat of battle. The American Bulldog is not afraid to take charge in situations where his family or his families property are endangered.

Responsible ownership of American Bulldogs is a must. Like a young human, a young American Bulldog must be taught what is right and what is wrong in order to live in society. Early socialization and basic obedience training is the key to responsibly owning this breed.