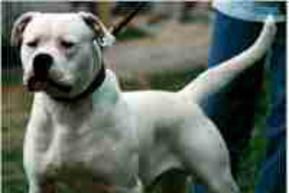 The following is a brief story of White Fang, Casey, and Sheila's Couturier roots in the American Bulldog world.

In I988, after being attracted to this breed by some real slick full page ads 'in Dog World magazine, I took the plunge and went to visit Joe Painter in Illinois. I was impressed enough to spend more money then I care to admit on buying "pick of litter" brood stock from Joe Painter and later from Joe and Margentina when the started their partnership. I really wasn't satisfied with most of the dogs I bought from Painter. The dogs mostly looked good cosmetically and had brave bulldog hearts but had a variety of physical disorders.

The dogs I bought from the liar in Massachusetts (REDACTED) were simply pitiful, real mental basket cases. The dogs themselves and the relationship with the breeder himself equaled the worst horror breeder/puppy story you have heard.

Joe Painter honored his guarantee but the replacements I got were as bad as what they replaced. The fellow from Massachusetts knew of the difficulties of suing out of state for a few thousand dollars and refused to honor his guarantee.

I was about to chalk up the $I0,000+ I had spent on the dogs as a valuable lesson learned, and stick with a breed that didn't have all those problems, which I already had. (I had my own strain of Pit Bulls that I had bred for 12 years as companion/ guardians.) At that point I wouldn't have given a plug nickel for another American Bulldog.

One day a fellow named J'im Dewberry from Virginia, whom I had sold a couple of Pit Bulls, called and asked me if I wanted a free American Bulldog with the agreement that he would get a dog back sometime. He described the dog as a little demon that would bite me. I took this as a challenge and agreed to take the little monster.

Jim had warned me that this pup would come out of the crate and attack anything he saw and to be careful. I had never seen the puppy that would not learn respect real quick with the proper discipline, and was ready to take any appropriate action.

The first pleasant surprise was that little baby Fang came in a free crate with no shipping bill. The second was that little Fang bounded out of the crate and wanted to play. Just a normal rowdy pup. He would play as hard as you wanted and I could not figure out why Dewberry thought this was a viscous pup. He would retrieve a ball and would play tug of-war as long as you wanted. And he looked and acted like I wanted my other bulldog pups to look and act like. I and many others got sucked in and bought dogs from Joe Painter that we hoped would mature into a dog like Sgt. Rock. After $ 10,000 invested, none did. And now I had one. I felt I was due for a break and a good bulldog.

As a growing pup. Fang was a lot of fun. He was definitely not a dull dog. If he got bored playing by himself, he would bring his tennis ball and drop it or throw it in your lap. If you didn't grab it quick, he would grab it back with part of you if you weren't careful. From the day we got him at I 2 weeks old he never soiled the house and never destroyed anything of importance. The only dog I've ever had to be that good. He always came when he was called and liked to keep you in his sight.

At around six months old, Fang's innate qualities of protectiveness started to blossom. My friend John Tatman, who lives near Dayton, Ohio agreed to evaluate and help train Fang if he had what it takes. John had previously finished his Pit Bull Sam to a Schutzhund III and has since titled a son of Sam's. John also is the author of Dear John, the training and problem solving column we run in American Bulldog Review when there are questions for it. John has spoke at many Schutzhund seminars and is respected by fellow trainers and judges. I was lucky to have a friend that qualified that was willing to help train Fang.

Fang possessed well developed and balanced defense and prey drives and took to the protection phase of Schutzhund like a duck to water. Fang was never trained enough to get any titles, but his protective qualities did get some fine tuning that helped to make a hard, brave dog that knew no fear and would lay his life down for you.

Even at a young age Fang instinctively "took over" when I was out of town. He stuck to Sheila like glue and let any visitor know that he was in charge.

Anyway, he really was the inspiration for all of Sheila and my contribution to the American Bulldog breed.

In summation, I would like to dedicate this ABA web site and all future issues of American Bulldog Review, plus any good that we have done for the breed with the A.B.A. registry and the foundation of the WABA to the memory of my big White Buddy, Watchdog White Fang. 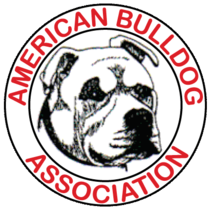